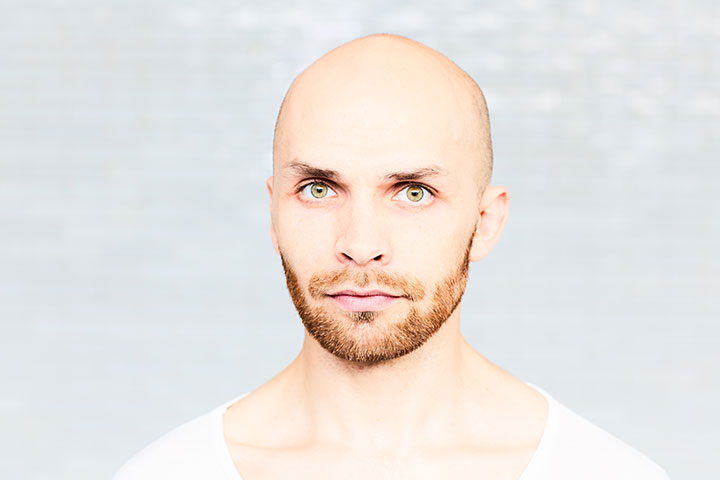 Oleg Stepanov actually has a degree in physics. But while he was still working in a laboratory in Russia, he was already dreaming of dance and theatre. He was lucky to join a small dance theatre group in Ekaterinburg, where he first saw a video recording of Pina Bausch’s work. Such VHS tapes were rare in Russia, but Pina Bausch was a well-known star and greatly admired in the theatre field. Born in 1983, Oleg Stepanov grew up in the Urals, an industrial region in the east of the former USSR. For many residents there was only one goal, namely to work in the large steel factory. His parents also wanted that for Oleg. He studied for five years at the State University of the Urals and then worked at the steel plant. But he longed for something different. Until then, his only dance experience had been ballroom dancing as a hobby. At the age of 23, he started taking dance classes and workshops in classical and contemporary dance – anything besides working at the factory. Eventually an opportunity opened up to join a contemporary dance company in St. Petersburg and he quit his job. “My parents thought I had made a wrong decision. But I felt with my body and mind that I wanted to dance, that it was my destiny”, he says today. Later, he auditioned for the Provincial Dance Theater in Ekaterinburg and was accepted into the company, finally returning home. He stayed in Ekaterinburg for five years, before moving to Europe to work with a greater range of choreographers. His first job was with the GöteborgsOperans Danskompani in 2013. There he met Adolphe Binder, who would later become the Tanztheater Wuppertal’s artistic director. After she had left Gothenburg, he stayed in Sweden for one more year, taking the chance to audition in Wuppertal in 2016. Since 2016, he has danced in nine pieces by Pina Bausch. Oleg Stepanov enjoys collaborating with dancers from different generations in the company. "It is a luxury here and you can learn so much." He is fascinated by and admires his older colleagues "for their qualities, their dedication". Now that his dream of being part of the Tanztheater Wuppertal has come true, he has a new dream: to perform with the company in Russia. The Tanztheater has not been there since Pina Bausch's death in 2009.